Sets are listed in order of the year they were made. 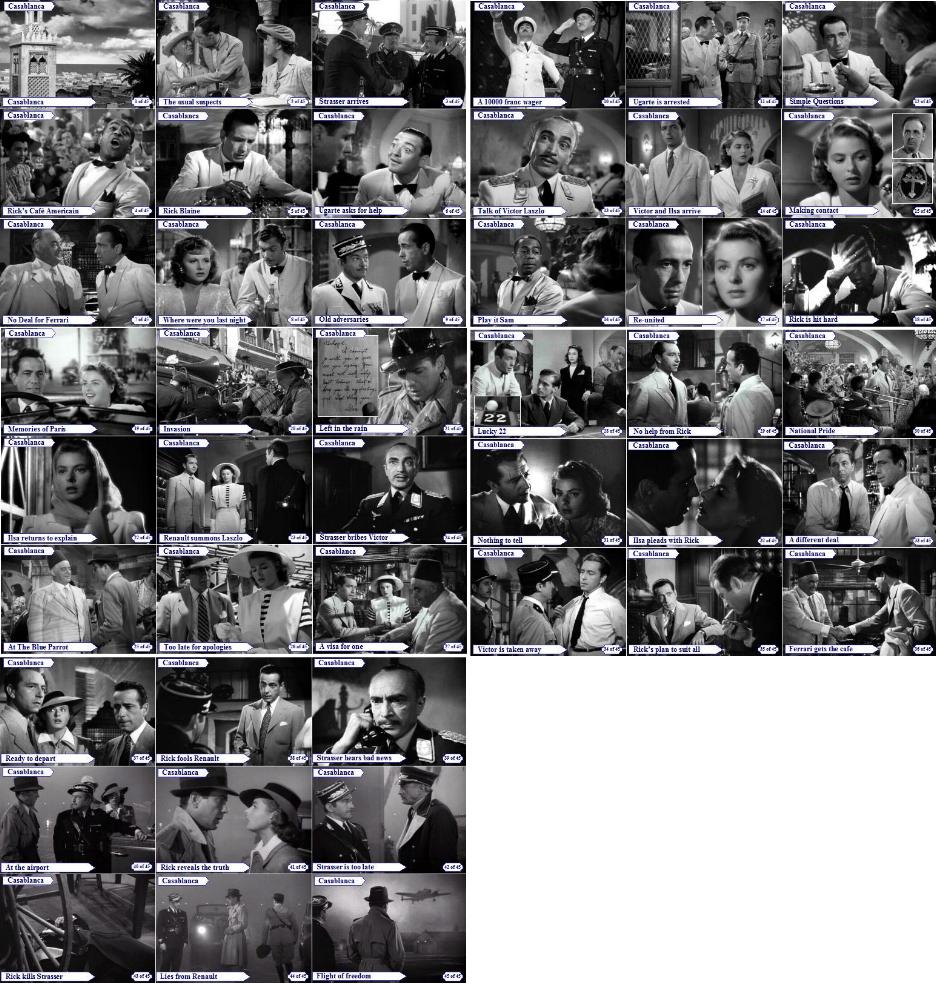 In Casablanca is Rick's bar where refugees escaping Europe can buy safe passage to America. Rick (Humphrey Bogart) is a man who looks after himself but when his old flame Ilsa (Ingrid Bergman) arrives with her husband his past comes back to haunt him and he has to make a choice either help himself or help her so she will leave his life forever. The story of the movie is told throughout the reverse of the cards.

A card character set is also available as below. 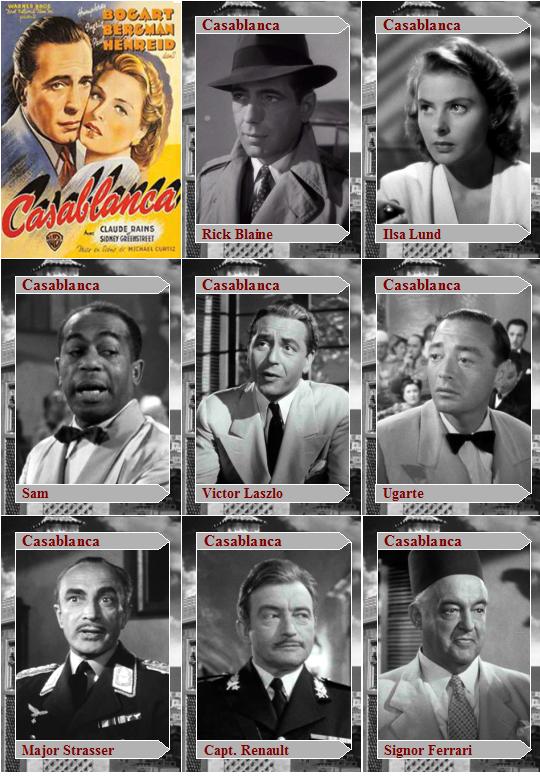 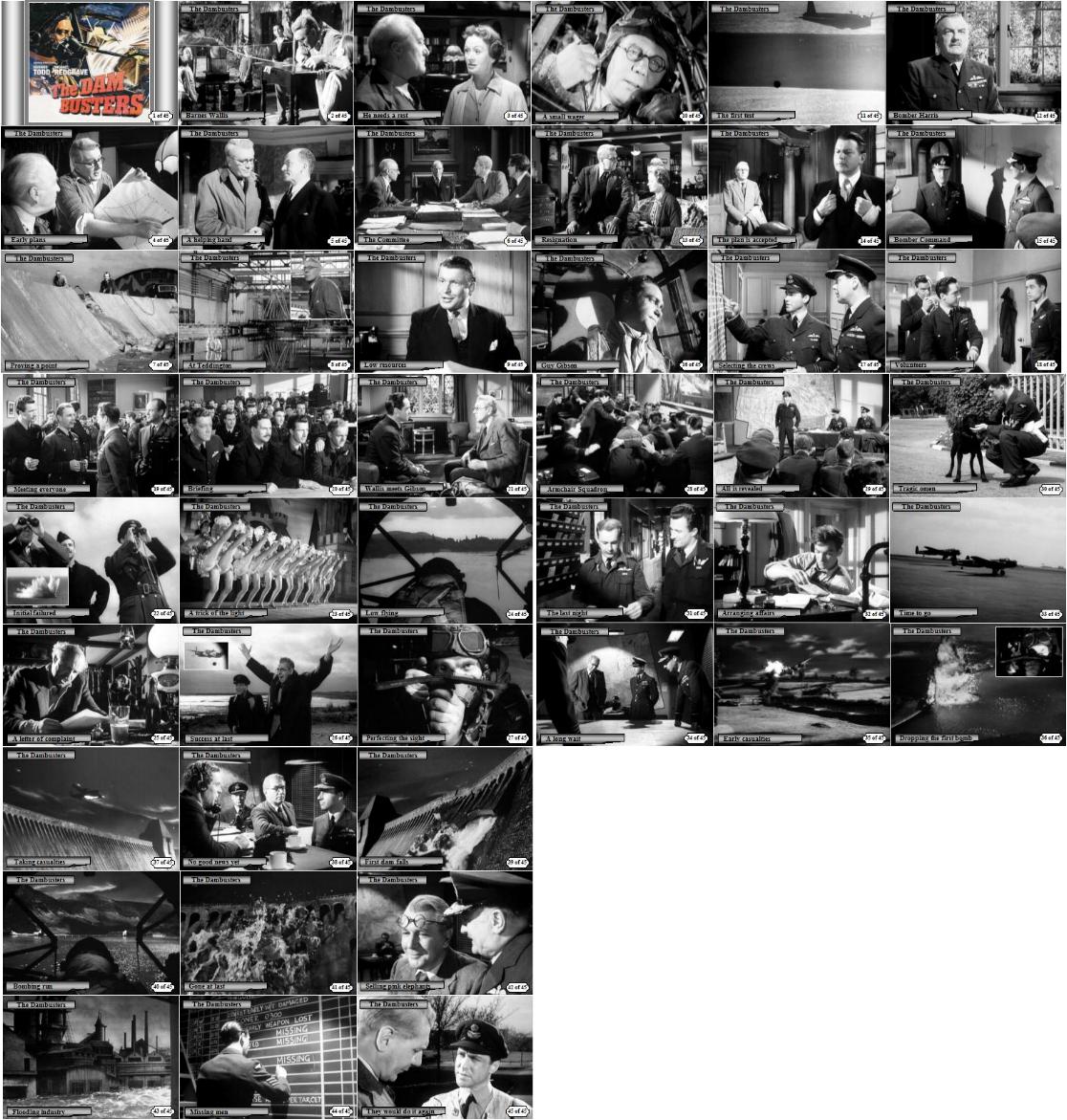 A superb movie citing one of wars greatest true stories. Dambusters tells the story of Barnes Wallis and his bouncing bombs and the brave men such as Guy Gibson who, in their Lancaster bombers,  used them to destroy the dams protecting the enemy's industry. Stars Michael Redgrave and Richard Todd. This set tells the story throughout the back of the 45 cards.

Audie Murphy stars in the story of his own heroic deeds in the US army during the war. We follow him from his young days in Texas, his service in Europe and the comrades and friends he made and lost.

A 54 card storyboard set is also available as follows for £12.50 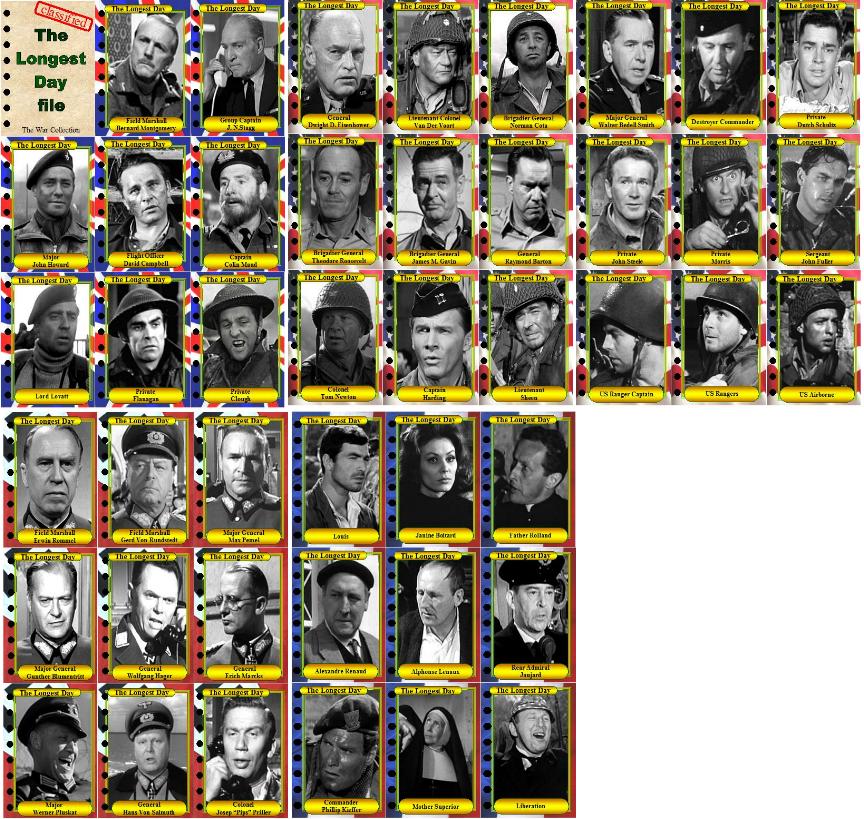 This is a 45 piece set representing the 1962 movie The Longest Day. Starring such greats as Richard Burton, John Wayne, Henry Fonda and Robert Mitchum this set recounts the D-Day landings on 6th June 1944. Each card represents a character and on the reverse is the story of their part in the movie. 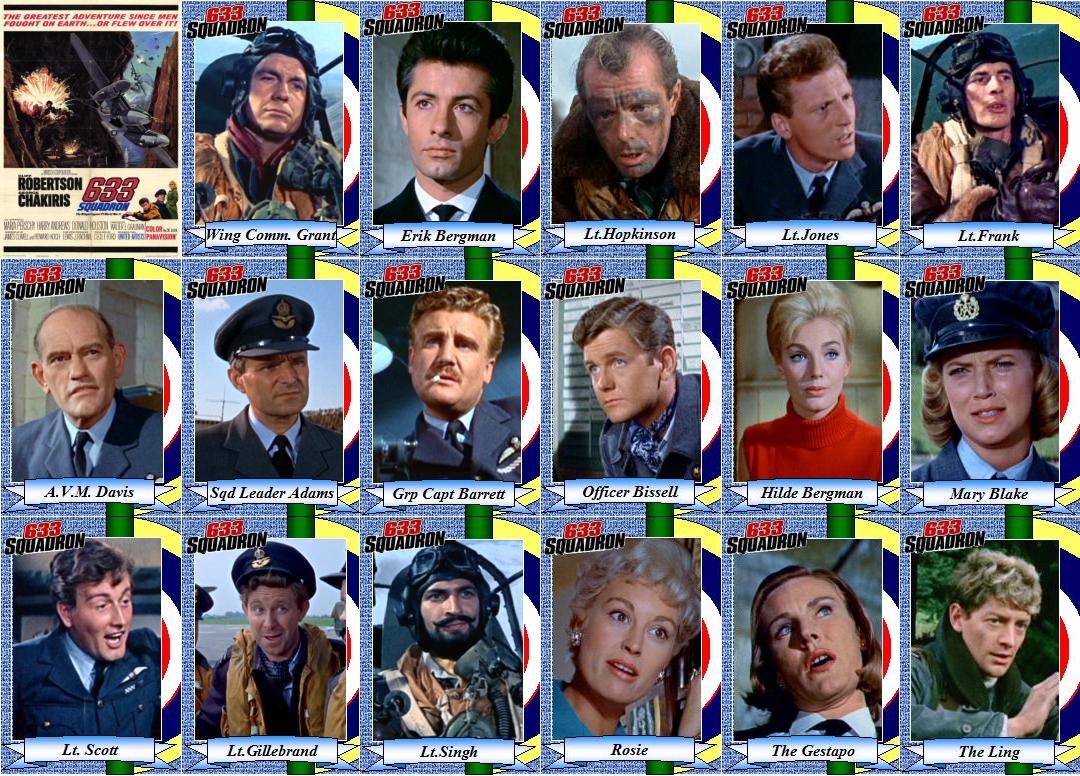 Germany is building deadly new rockets so Roy Grant (Cliff Robertson) and 633 Squadron are called upon to destroy the factory that makes the fuel to power them. In a daring plan devised by Norwegain resistance fighter Erik Bergman (George Chakiris) they give their all to bury the factory under a pile of rocks. Also starring Harry Andrews, Donald Houston and Maria Perschy.

A 45 card storybaord set is also available as follows: 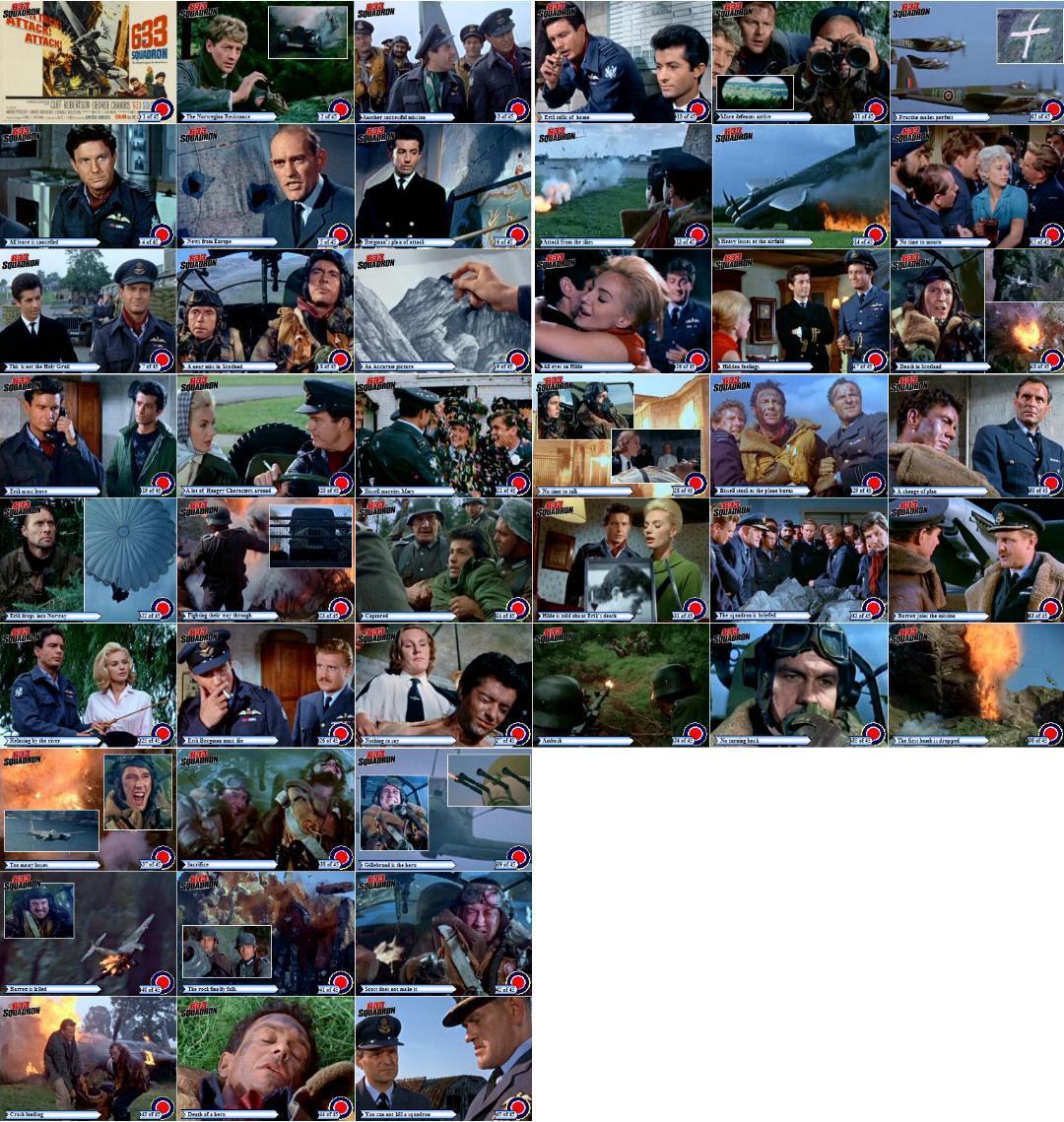 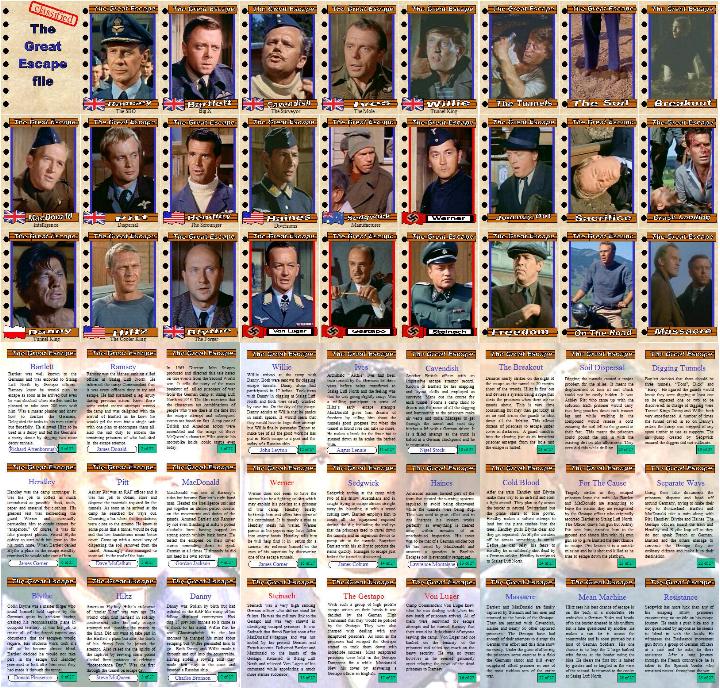 All of the main cast are represented as well as key moments from the movie. On the front of the cards 1 to 18 are the characters and on the reverse are the details of their involvement in the movie. The last 9 cards show the moments of the movie that make up the storyline with detail of that story on the reverse.

A 54 card storyboard set is also available as below: 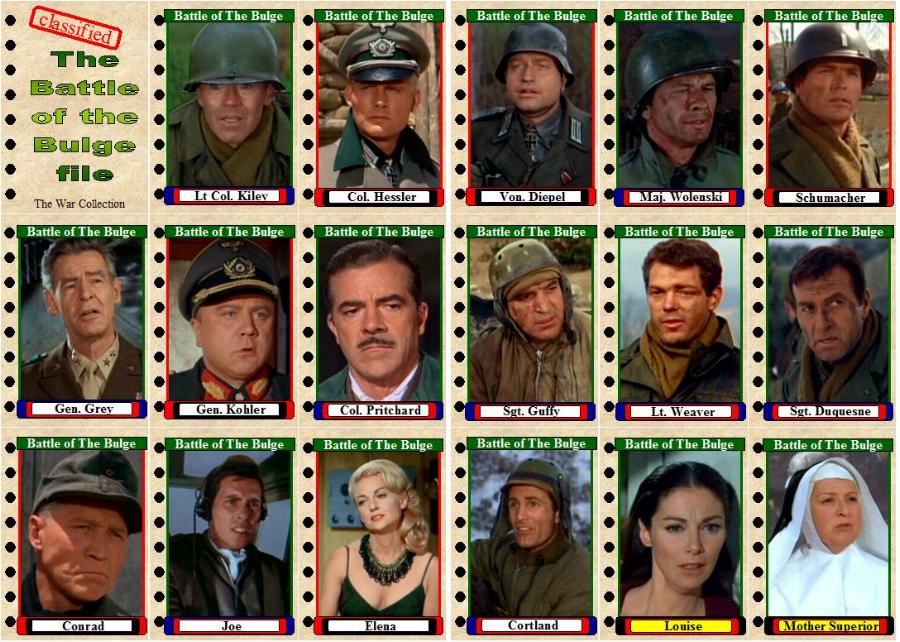 Christmas 1944 and Germany is running out of resources. General Kohler calls in veteren tank commander Colonel Hessler to make a final desperate push against the Americans in the Ardenne. Leading the fight back against the Germans is Lt Colonel Kiley and soldiers such as Wolenski and Guffy. In the end it comes down to who can reah the fuel dump first. Stars Henry Fonda, Robert Ryan, Telly Savalas, Charles Bronson and a host of others. 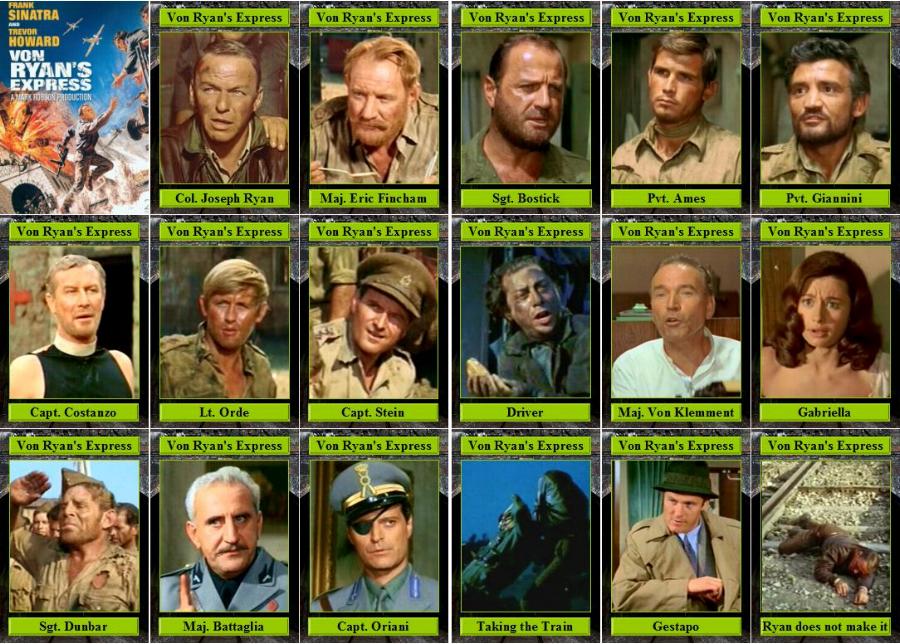 This is an 18 card set representing the classic war movie Von Ryan's Express. Colonel Ryan (Frank Sinatra) crashes in Italy and is taken captive. He instantly takes command of the prisoners until Italy surrenders but German troops arrive and transport them by train to Austria. They have to escape and in a cooly calculated plan they take over the train and head for Switzerland. The Germans are in pursuit and are determined to stop them. The story of each character can be found on the back of the cards. 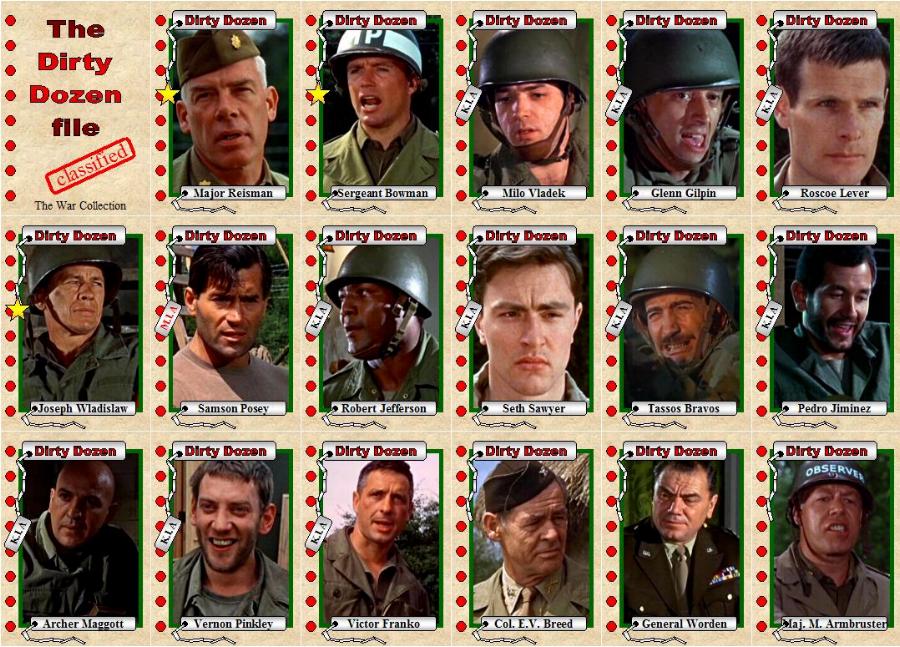 A modern Day Homage to the classic War Film The Dirty Dozen. Starring Lee Marvin, Charles Bronson, Telly Savalas, Jim Brown and Donald Sutherland. A group of convicted soldiers are given a second chance in a deadly mission behind enemy lines. All characters are included and their deeds are detailed on the reverse of each card. There are 18 cards in the set.

The war is drawing to a close. The Germans are trying to retreat back to the Fatherland but only one bridge remains on their escape route, at Remagen. The Americans want to destroy it and the Germans want it intact. Lt Hartman (George Segal) leads his troops against the defences hastily assembled by Major Krueger (Robert Vaughan) and the outcome will help win the war.

A host of British and European actors star in this great movie representation of The Battle of Britain. Facing overwhelming odds in 1940 the young pilots of the RAF are all that stand between freedom and invasion. Stars Laurence Olivier, Robert Shaw, Christopher Plummer, Michael Caine, Trevor Howard and  Kenneth More.

A 54 card Movie storyboard set is available as below. 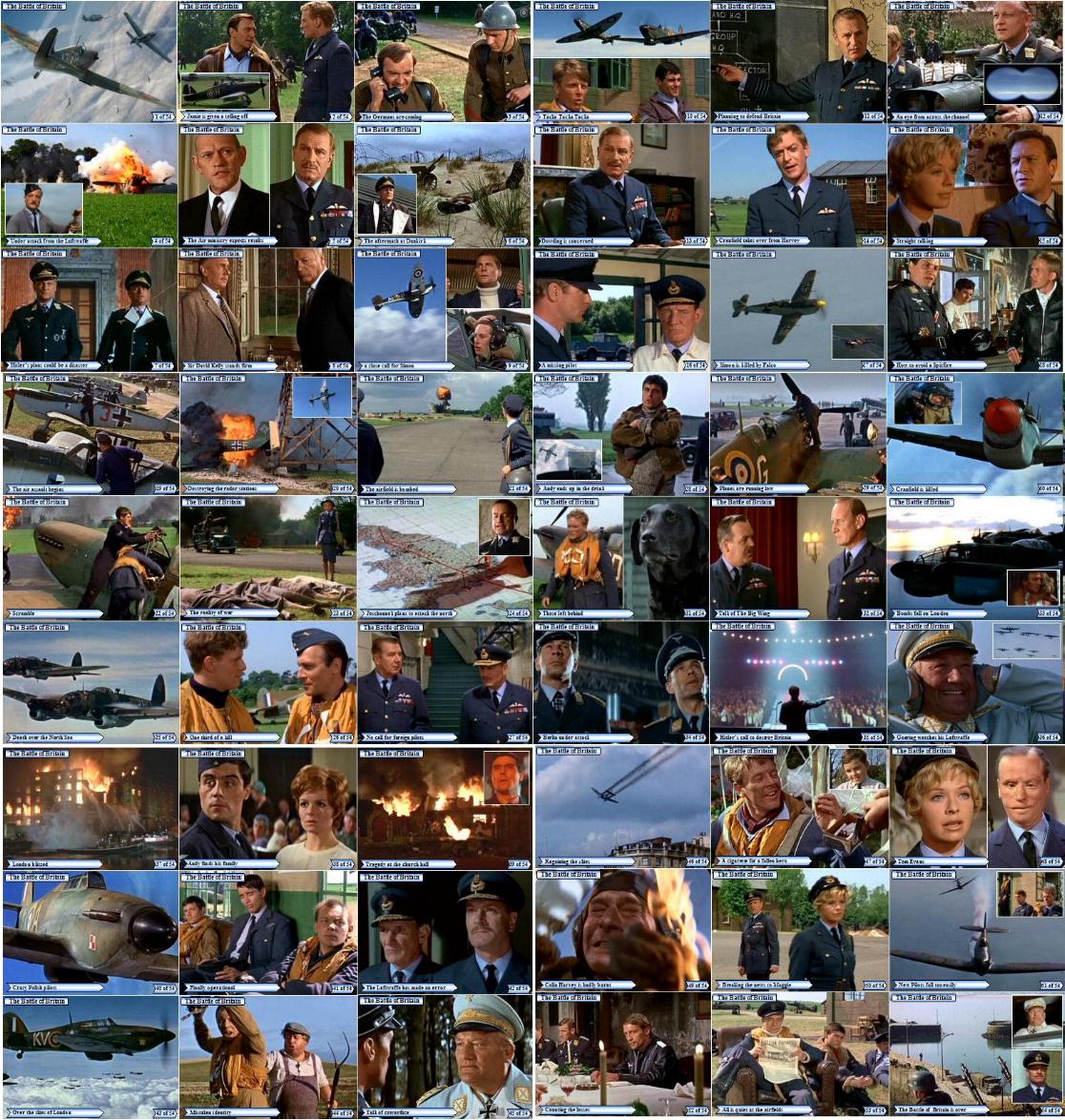 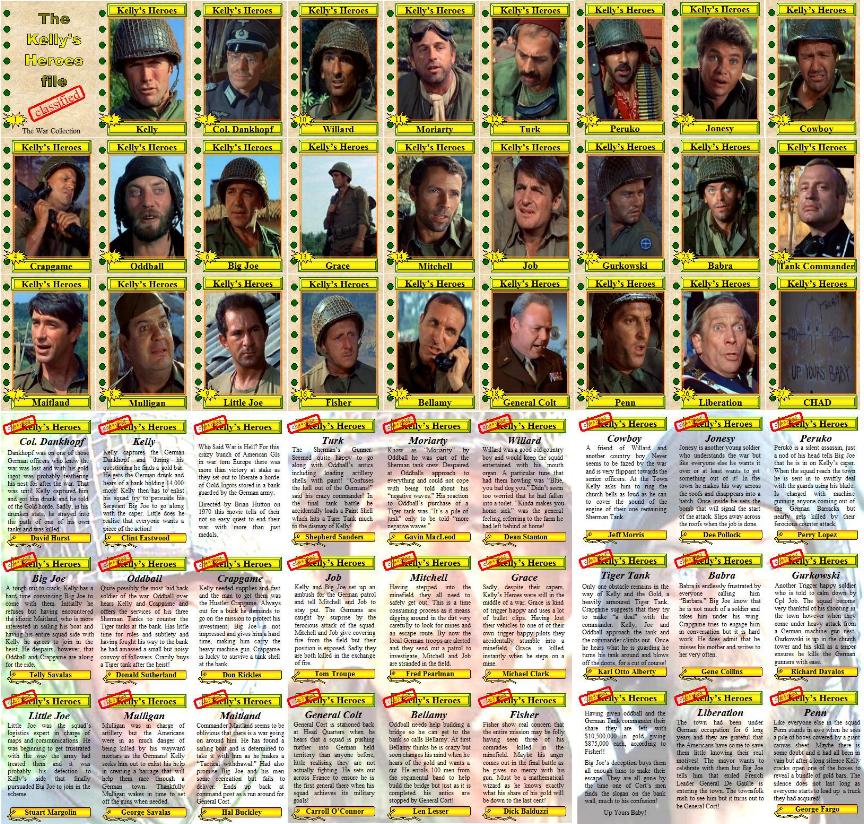 Clint Eastwood leads his bunch of GIs in search of German gold at the end of World war two and takes in a host of characters on the way.
All of the characters are represented as well as key moments from the movie. On the front of the cards are the characters and on the reverse are the details of their involvement in the movie and aspects of the story. 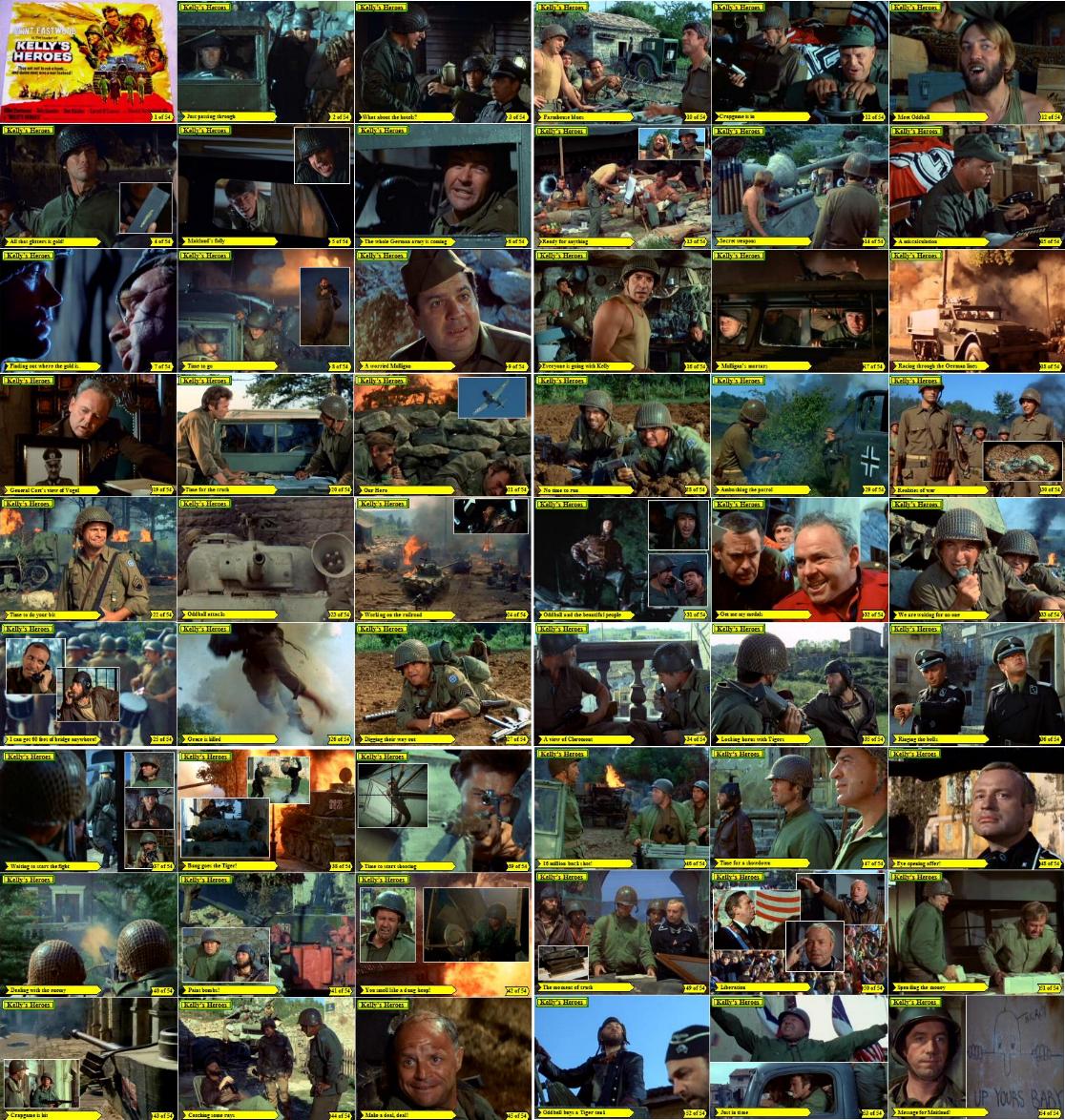 This 1971 classic stars Richard Burton as a stranded officer who enlists a group of prisoners and medical staff to help destroy vast German coastal defences at Tobruk. Standing in his way is Rommel himself. Also stars John Colios, Wolfgang Preiss and Karl-Otto Alberty. 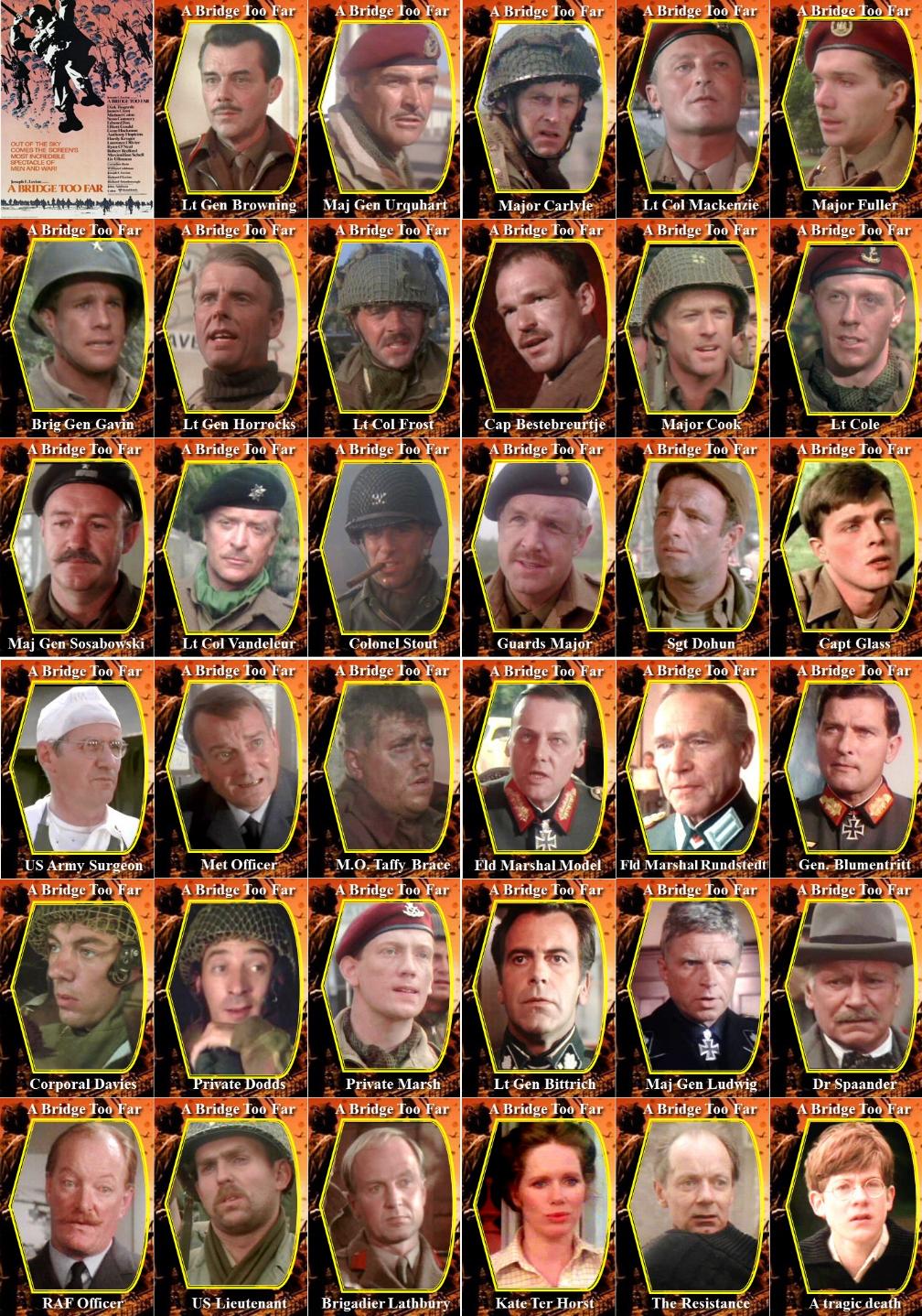 This 36 card set represents the classic war film A Bridge too far and tells the story of Operation Market Garden, the allied attempt to capture vital bridges from the Germans in a bid to end the war. A host of stars are included such as Sean Connery, Michael Caine. Anthony Hopkins, Ryan O'Neal, Dirk Bogarde, Edward Fox, James Caan, Gene Hackman, Maximillian Shell, Laurence Olivier and Liv Ullmann. The story of each character is shown on the reverse of each card.

A 72 card storyboard set is also available as below with the story of the movie on the reverse of each card. 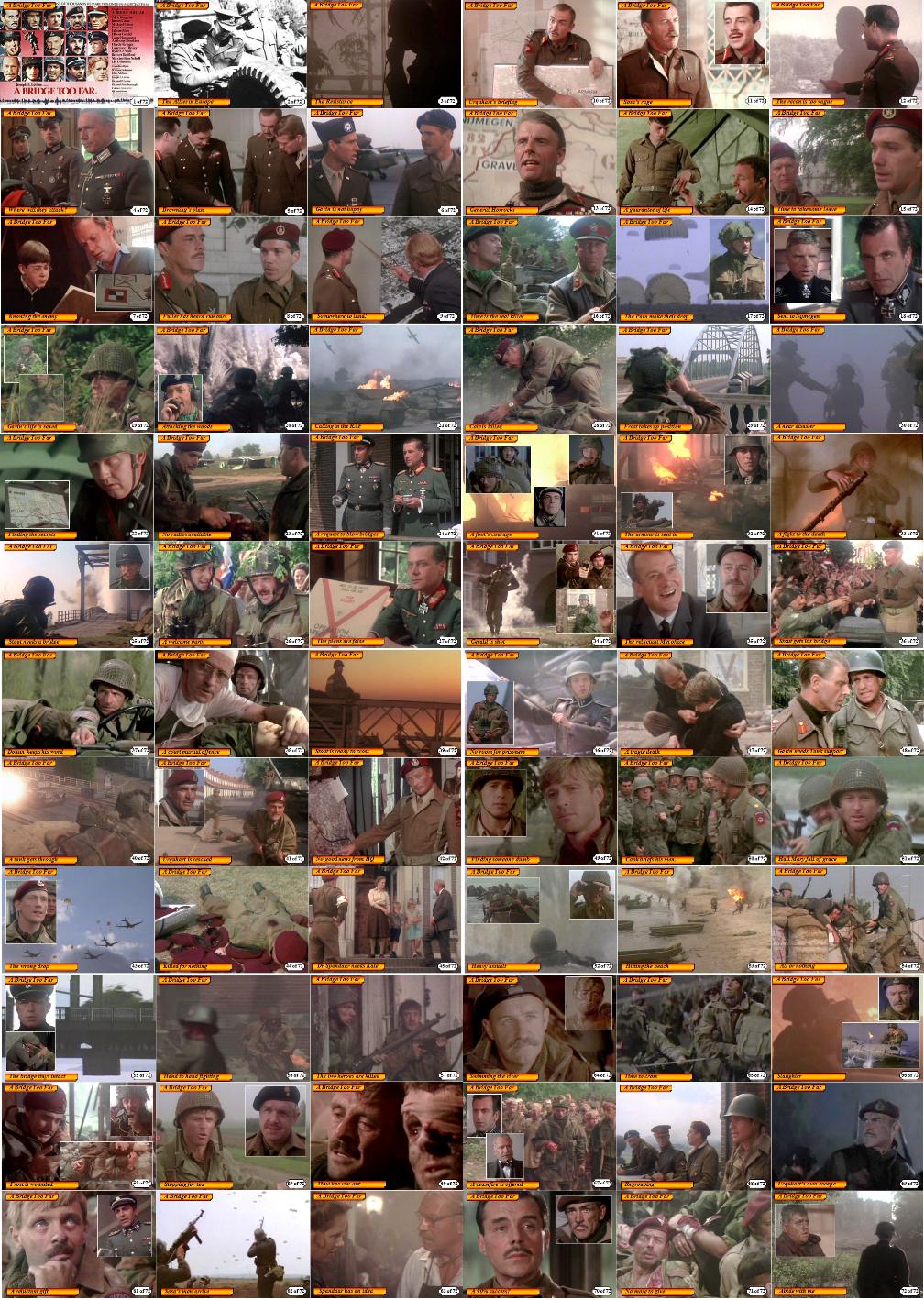 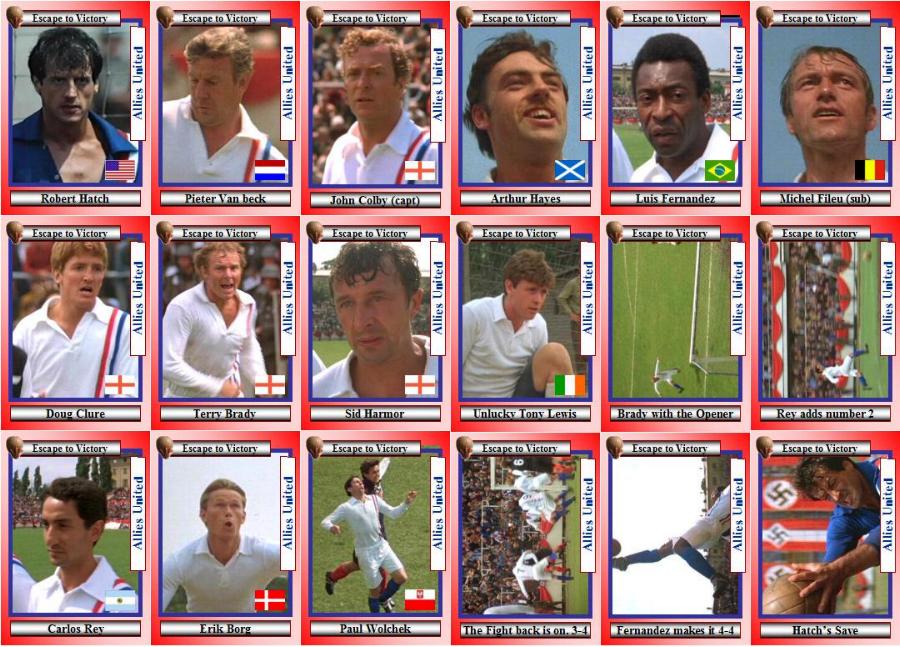 Real fantasy football.
This trading card set is based on the movie Escape to Victory.
A team of Allied prisoners of war take on the German national team amid an escape plot.
Great action and a host of football and movie stars on parade including Bobby Moore, Michael Caine, Pele and Sylvester Stallone.
On the front is the image and on the reverse are player profiles and other interesting facts about the game and the film. 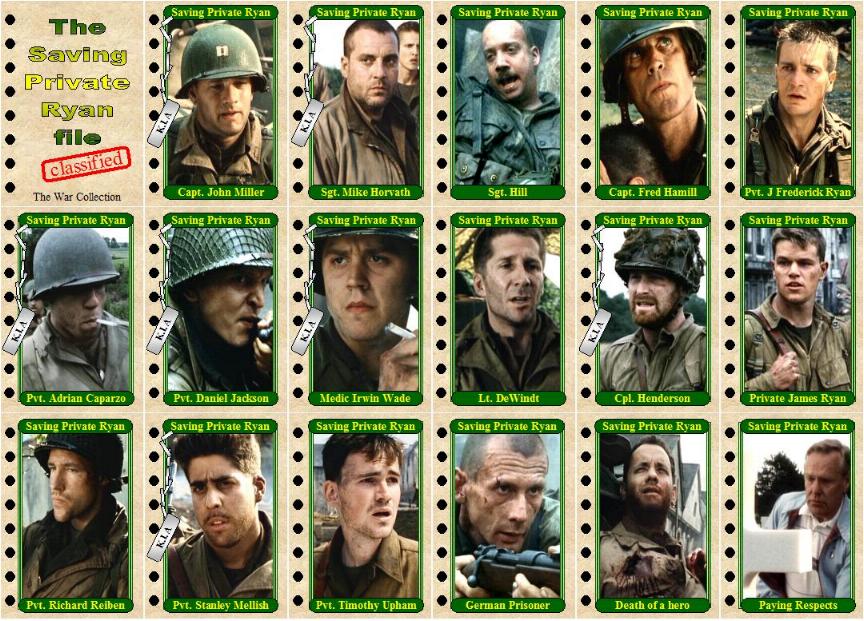 Part of The War Collection.
This is an 18 card set representing the great modern war film Saving Private Ryan and tells the story of Captain Miller (Tom Hanks) and his squad who, in war torn Europe, have to seek out Private James Ryan (Matt Damon) to inform him that his brothers have been killed in action. All of Miller and his squad are represented as well as a selection of soldiers they meet on their journey. On the reverse of each card are details of the part each character plays in the story.

This 27 card set represents the Quentin Tarantino classic Inglourious Basterds. A crack troop of Nazi hunting Jewish Soldiers are dropped into occupied France with the sole purpose of driving fear into the German Army but pursuing them is the very intuative Colonel Landa. Shosanna saw her parents murdered under Landa's orders and is determined to wipe out the German high command at a special showing in her movie theatre despite being wooed by German hero Zoller. Eventually all roads lead to the big screen and a very bloody ending. All the characters are represented and their story is told on the reverse of each card.