Movie sets from other times, worlds and dimensions.

Earth has a visitor called Klaatu (Michael Rennie) who has arrived with a message. He is accompanied by a powerful robot called Gort. However, Klaatu is deemed to be hostile and goes undercover among Humans to learn more about them. He meets Helen (Patricia Neal) and her son Bobby (Billy Gray) who show him not all humans are violent. Klaatu then shows his power by draining the world of energy. The military finally kill him but he rises from the dead to warn mankind to mend their ways.

Pilot David Randall (Richard Derr) is a pilot who inadvertently discovers that the top scientists know the world is about to be hit but a rogue sun. There is hope for mankind as the sun has a new planet orbiting it and a small number of people may be evacuated there. Dr Tony Drake (Peter Hansen) heads up a rocket building project and it becomes a race against time to save what is left of mankind. Randall also knows he does not have long to win over Drakes' daughter Joyce (Barbara Rush).

John Putnam (Richard Carlson) witnesses something crashing in the desert. He finds the wreckage of an Alien spacecraft and it seems some of the occupants have escaped. His Fiance Ellen (Barbara Rush) wants to believe him but soon realises he might be right when Aliens make copies of the townsfolk to blend in. John has to track down their lair when Ellen is taken hostage.

Dr Clayton Forrester (Gene Barry) is called in to investigate strange meteors that have fallen to Earth. There he meets Sylvia Van Buren (Ann Robinson). It soon becomes clear that this is an invasion from Mars. Earth's military power is not match against invaders who are intent on taking the planet for their own. Science has no answers and all looks lost but Mankind has a small ally that may save the day.

Dr Cal Meacham (Rex Reason) is recruited into a secret Scientific research project by Exeter (Jeff Morrow) where he meets old Flame Ruth Adams (Faith Domergue). They soon discover that the project is run by Aliens. They are kidnapped and taken to the Planet Metaluna to help rebuild a protective shield that will save the planet from attack. They are too late and in a desperate escape back to Earth they have to fight off the deadly Mutants.
£2.50
A 54 card storyboard set is also available as below for £12.00.

Commander Adams (Leslie Nielsen) and his crew cross space to find out what happened to the crew of The Belerephon 20 years ago on Altair 4. When they arrive they find Dr Morbius (Walter Pidgeon), his daughter Alraira (Anne Francis) and the powerful Robby the Robot. Suddenly the crew are attacked and Adams soon discovers an unusual suspect.

Based on the classic book by H.G.Wells. George (Rod Taylor) tells his friends in 1899 that he has invented a time machine. He returns 5 days later from his travels and tells them a tale of how he advanced through the world wars of 1917 and 1940. He also talks of a nuclear war in 1966. He travels 800,000 into the future to find a post apocalyptic world inhabited by docile humans (Eloi) and their cannibalistic foes (Morlocks). He also finds the beautiful Weena (Yvette Mimieux) but they are separated during a frantic escape back in time. George decides to find her in time again.
£2.50
A 54 card storyboard set is also available as below for £12.00.

During the American Civil War a group of Union prisoners make an escape in an observation balloon but are carried on winds created by a storm for days. They land on an island where they discover giant beasts and find their struggle for survival is aided by a mystery figure. Two women are washed ashore and they are all saved from pirates by the legendary Captain Nemo. However the island is an active volcano and together they must find a way off it.

George Taylor (Charlton Heston) and his crew crash land on strange planet 2000 after they had left earth. What they find is a world ruled by apes and mute humans that are hunted like animals. Taylor is wounded and captured during a hunt and his wound causes the loss of his voice. Zira finds him fascinating and when he regains his speech the ruling apes know he is a threat to their entire culture. What Taylor discovers about this planet rocks him to the very core of his humanity.
£5.00

Brent (James Franciscus) is sent into space to find Taylor (Charlton Heston) and ends up on the same planet ruled by Apes. All he has is the mute Nova (Linda Harrison) to help him. The apes want to wipe out humans for good but do not know they are telepathic and possess a bomb that will destroy the world

The war between man an ape has destroyed Earth. Cornelius (Roddy McDowell) and Zira (Kim Hunter) are two apes that use Taylor's spaceship and find themselves in 1970's America. At first they are treated as celebrities but when they reveal the Earth will be ruled by talking apes and that Zira is pregnant Government forces know they have to be destroyed.

Cornelius and Zira are dead but their child Caesar has survived. It is 20 years later and news reaches the Government that he may be alive so he goes into hiding with apes that are kept as slaves. Caesar has seen how badly the apes are treated and he leads a revolt against the humans. He declares there will be a Planet of Apes. Also stars Ricardo Montalban.

Earth has been devastated by war. Caesar is trying to build a world where Apes rule but he is tempted into the Forbidden city where he might find records of his parents. He does not realise the city is populated by mutated humans. This leads to conflict and a final battle for the planet. Caesar also faces danger from Aldo (Claude Akins) and his army of gorillas.

Robert Neville (Charlton Heston) is immune to the plague that has wiped out mankind. All that are left are the mutated family led by Matthias (Anthony Zerbe). Both are hunting each other but Neville finds a new purpose when he meets Lisa (Rosalind Cash) and he may well be the savior of the human race.

Peter (Richard Benjamin) and John (James Brolin) have paid big bucks to be entertained at the fantasy resort of Westworld. They can live out the dreams of the old west without coming to harm. They are constantly challenged by a robotic gunslinger (Yul Brynner) but as time passes the robots begin to malfunction and they find themselves in a battle against a relentless killer.

A 54 card storyboard set is also available as follows for £12.00

In the 23rd century mankind lives for pleasure but only until the age of 30 when their life is ended on the carousel.

They can take their chances and run but they will be hunted down by the Sandmen.

Logan 5 (Michael York) is a Sandman who is sent on a secret mission to infiltrate a gang of runners but there is a catch as his remaining years have been wiped away and he is facing the carousel.

He decides to run with the help of Jessica 6 (Jenny Agutter) but his old Sandman partner Francis (Richard Jordan) chases them all the way to the old world where they meet the oldest man alive played by Peter Ustinov.

A 54 card Movie Storyboard set is also available as below for £12.00

Close Encounters of the Third Kind - 1977

Aliens have visited Earth in the past and now they have come back. Not only are Governments affected by this but also ordinary people who find themselves inexplicably drawn to Devils Tower in Wyoming. Roy Neary (Richard Dreyfuss) and Jillian Guiler (Melinda Dillon) are two such people, both heading there for different reasons and both believing the Government is hiding something. They soon find this is bigger than they ever suspected.

This 18 card set tells the story of how Pro footballer, Flash Gordon (Sam Jones), travelled from Earth to Mongo to defeat the evil Ming (Max von Sydow). Accompanying him are Dale Arden (Melody Anderson) and Dr Zarkov (Topol). They soon find themselves amid a battle for the throne. Also stars Timothy Dalton and Brian Blessed.

Akir is under threat from Sador (John Saxon) so Shad (Richard Thomas) scours the galaxy looking for mercenaries who will help defend his planet. He finds a variety of warriors who join the fight, some for honour, some for a sport and some for a place to hide. Also stars Robert Vaughan, George Peppard and Sybil Danning.

A 54 card storyboard set is also available as follows for £12.50

This is an 18 card set. Bickering Gods on Mount Olympus instigate a perilous task for Perseus, the son of Zeus, as he seeks out the head of Medusa to prevent his city being destroyed by the might Kraken. His quest is continually sabotaged by the evil Calibos. Stars Harry Hamlin, Laurence Olivier, Maggie Smith, Burgess Meredih and Judie Bowker.

This is a 9 card set representing the 1984 Sci-Fi classic starring Arnold Schwarzenegger as a cyborg sent back in time to kill the mother of a future enemy. Following him is Kyle Reese (Michael Biehn) who is sent back to protect the target, Sarah Conner (Linda Hamilton). Without her unborn child

Connor MacLeod (Christopher Lambert) is banished from his village in the Highlands of Scotland when he is miraculously cured of a fatal wound in 1536.

and in the end all of the immortals will fight to the death throughout time for the prize .

Kurgan (Clancey Brown) is an evil Immortal who must not claim the prize so MacLeod is prepared by Ramirez if ever they should meet.

MacLeod is still alive in 1985 in New York where the final battle will take place.

He attracts interest from the police and Brenda Wyatt (Roxanne Hart) a forensic sword expert.

The winner will be the one who does not lose his head.

There can be only one!

This 9 card set represents the 1987 classic movie, Predator. Dutch (Arnold Schwarzenegger) and his team of elite commandos are sent into the Latin jungle to rescue a diplomat but the hunters soon become the hunted as an alien predator sees them as the perfect test for his deadly skills. Also stars Carl Weathers, Bill Duke, Sonny Landham and Jesse Ventura.

The Predators are back and one sees LA Cop Mike Harrigan (Danny Glover) as its next target. Harrigan is caught up in a drugs war but when rival gangs are slaughtered he realises there is a new player in town. The Predator begins to target Harrigan's team in an attempt to lure him into a fight to the death. All the while the mysterious Peter Keyes (Gary Busey) appears to have other plans. Also stars Bill Paxton, Maria Conchita Alonso and Ruben Blades. 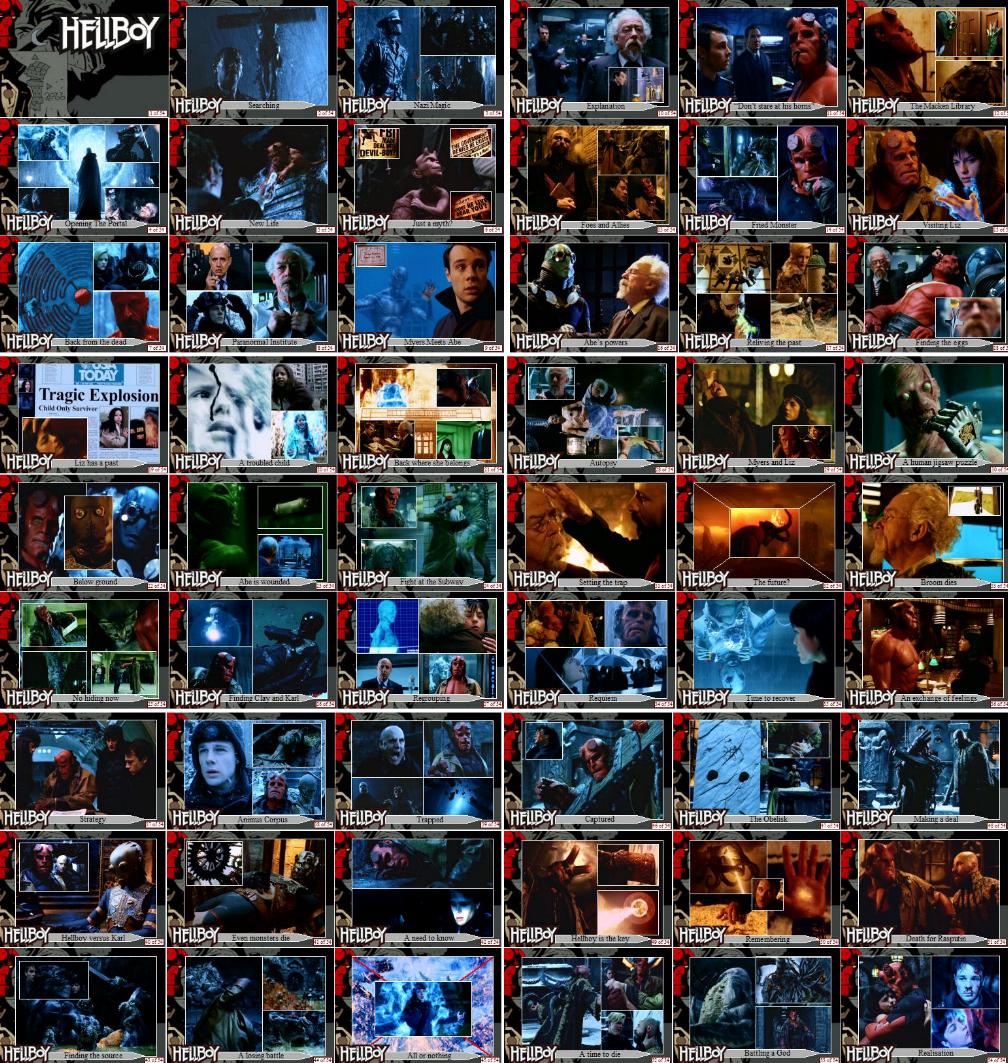 This is a 54 card set representing the Hellboy movie (2004) starring Ron Perlman as the title character created by Nazi magic but trying to find his way in the world with the help of his "Father" Broom. This is a flawed hero and time catches up with him when the evil of his past comes calling and tragedy strikes. The story of the movie is told throughout the reverse of the cards.